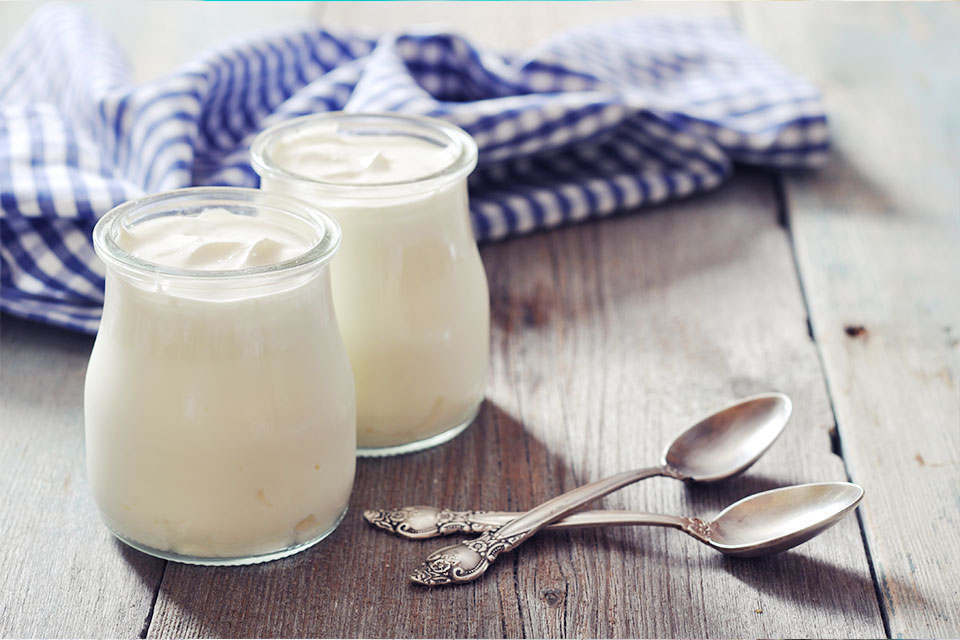 Yogurt tenderizes the protein in flour, resulting in soft-to-the-bite muffins, pastries or cakes. Its slightly acidic flavor adds a bit of tang.

Yogurt is a cultured milk product that is soured and thickened by the action of adding specific lactic acid-producing cultures (Lactobacillus bulgaricus and Streptococcus thermophilus) to pasteurized milk.

Flavored Yogurt is sweetened and flavored with fruit or other flavors. It is not generally used in baking.

To make yogurt cheese, a silky, creamy cheese that can cut fat in baked goods, simply drain nonfat plain yogurt through cheesecloth that’s been placed over a bowl in the refrigerator for 24 hours. After one day, you’ll have a deliciously creamy cheese that’s much sweeter than original plain yogurt. Depending on how long it’s drained, yogurt cheese can resemble sour cream or a lighter cream cheese. It can be used in place of cream cheese in most cheesecake recipes. It can also be used as a base for dips or as a spread for bagels and crackers.

Whip 1/2 cup heavy cream with 1 tablespoon sugar and 1 teaspoon pure vanilla extract until soft peaks form. Fold into 2/3 cup soft drained yogurt cheese (see above). Serve right away or cover and refrigerate a few hours. Serve with scones or fresh fruit such as strawberries or peaches, or use as a filling for cakes.

Softly whip 1/2 cup cream and fold into 3/4 cup whole milk yogurt. Sprinkle 1/4 cup brown sugar over the surface, cover bowl and refrigerate until the sugar melts. To serve, swirl the sugary syrup through the yogurt-cream mixture. This is an ideal accompaniment to fresh berries, poached pears, apples or peaches, and even cakes.