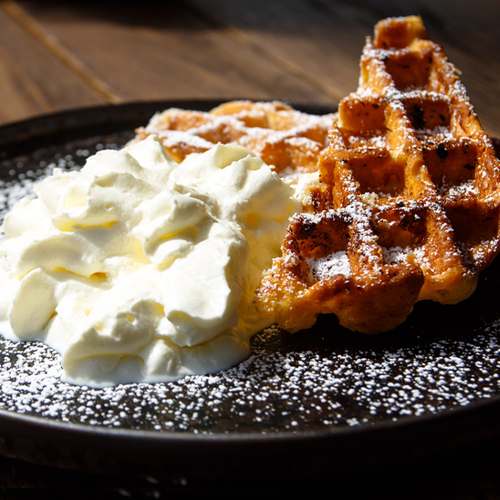 In a large bowl, combine flour, sugar, baking powder, and salt. Set aside.

In another large bowl using a hand mixer or in the bowl of a stand mixer using the paddle attachment, beat sour cream, egg yolks, and butter on medium speed until smooth.

In a medium bowl using a hand mixer or another bowl of a stand mixer using the whisk attachment, beat egg whites on high speed to stiff peaks.

Preheat a waffle maker according to the manufacturer’s instructions. Add about 1/3 cup of batter for each waffle, spreading it out in the waffle maker, and cook until golden, about 5 minutes. Repeat with remaining batter.

Meanwhile, in a large bowl or the bowl of an electric mixer using the whisk attachment, beat crème fraîche to soft peaks.