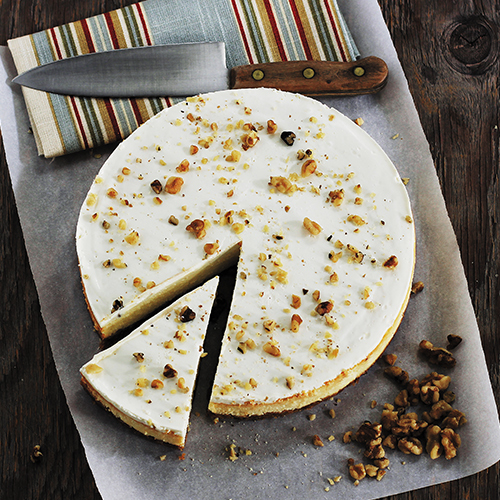 In a medium bowl, combine the graham cracker crumbs, walnuts, butter, cinnamon, and 3 tbsp. of the sugar. Press the mixture into the bottom of a 9-in. spring-form pan and bake for 10 minutes.

Meanwhile, using a hand or a stand mixer, combine the cream cheese, flour, and 3/4 cup of the sugar, beating until well blended. Add the eggs, one at a time, beating well after each addition. Blend in the vanilla, 1/2 cup of the sour cream, and 1/4 cup of the rum.

Pour the cream cheese mixture over the crust. Increase the oven to 450°F and bake for 10 minutes. Reduce the oven to 250°F and continue baking for 25 minutes.

Meanwhile, in a medium bowl, combine the remaining 1 1/4 cups of sour cream, remaining 2 tbsp. of sugar, and remaining 1 tsp. of rum.

Spread the sour cream mixture on top of the cheesecake and bake for another 10 minutes. Remove the cheesecake to a wire rack and immediately run a knife around the edges to release it from the pan. Set aside to cool completely.

Unmold the cheesecake and refrigerate it until well chilled. Garnish with walnuts before serving.

This recipe came from my mother-in-law. When my husband and I were first married, she made this for every family get-together. After our first anniversary, she gave me the recipe and said that now it was my turn to make it. I have been making this cheesecake for almost 23 years now, and everyone loves it just as much as before. We love it with freshly sliced strawberries over it.