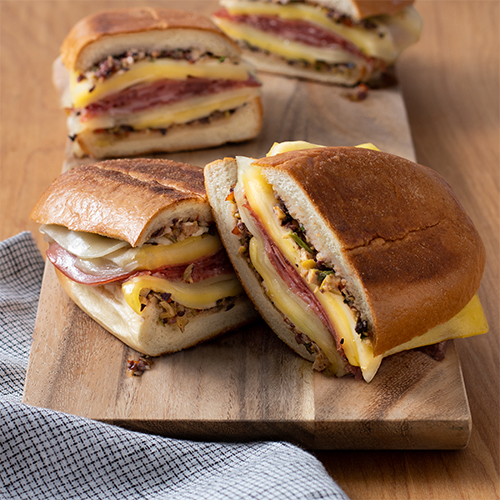 In the bowl of a food processor, combine olives, celery, parsley, lemon juice, oil, oregano, and pepperoncini peppers, if using. Pulse to coarsely chop. Stir in salt and black pepper to taste.

Spread 1/2 teaspoon butter on outside of bottom half of each roll, arranging them buttered side down on a work surface. Top with 1/2 of olive mixture and 1/2 of cheese. Add salami, mortadella, sopressatta, and remaining cheese. Spread remaining olive mixture on top. Spread 1/2 teaspoon butter on outside of top half of rolls and arrange them, buttered side up, on top of sandwiches.

Preheat a large skillet over medium-low heat. Place sandwiches two at a time in the skillet, place a heavy skillet on top, and cook until browned, about 3 minutes per side. (Wipe off the skillet as necessary.)

Cut in half and serve.

Notes: After assembly, you can wrap the sandwiches in plastic wrap and store them as long as overnight before cooking them, allowing the olive mixture to soak into the bread.

You can also use a panini maker to cook the sandwiches.