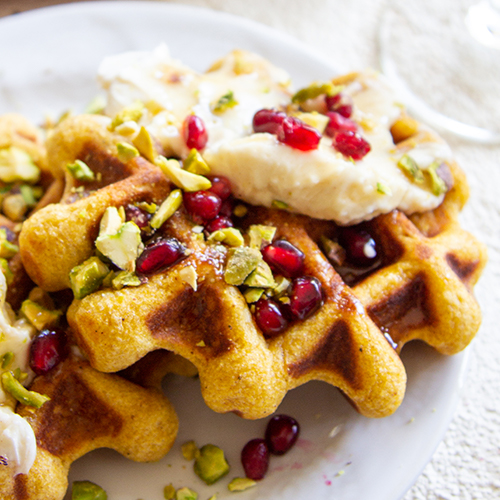 Pour the liquid mixture into the wet mixture and stir until just combined. Some lumps will remain, and the batter will be thick. Let the batter rest for 10 minutes.

With an electric mixture cream together the softened cream cheese, honey, and cinnamon until light and fluffy.

At the end of the rest time, give the batter a stir. Measure a ¼ cupful of batter into the well of a preheated waffle iron then close the lid. Cook for 2 minutes until golden brown and cooked through.

Do not stack cooked waffles on top of each other. This will cause them to loose their crisp. Simply transfer the cooked waffles in a single layer on to a cooling rack placed over a baking sheet inside a 200°F oven to keep warm until ready to serve.

To serve, spread each waffle with whipped cream cheese, sprinkle with pistachios and pomegranates, then drizzle with honey.

These waffles freeze wonderfully! Store in freezer-safe plastic bags and heat individual waffles up in the toaster as needed.