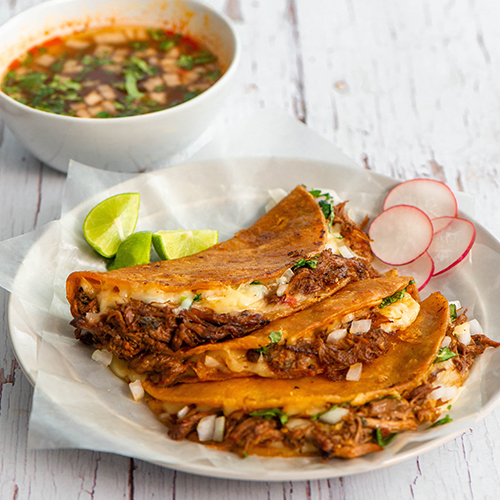 1. Place dried guajillo and ancho chiles in a large bowl with enough hot water to cover. Soak for 20 minutes or until chiles are soft and hydrated.

2. Roast tomatoes on a comal or in a cast iron skillet over medium-high heat. Turn tomatoes frequently with tongs until char spots begin to appear. Remove from heat and set aside.

4. Season pieces of meat with salt. Heat remaining oil in a cast iron skillet over medium-high heat. Sear meat on all sides, turning frequently with tongs. Add seared meat to a slow cooker.

6. Remove beef and discard any fatty pieces. Shred with 2 forks. Skim fat from the top of the broth and discard. Reserve broth.

1. Heat cast iron skillet over medium-high heat. Lightly brush broth from cooked beef on each side of a corn tortilla. Place tortilla on hot skillet and heat both sides for 30 seconds each.

2. Add 1/4-1/3 cup cheese on one side of tortilla and 2 tablespoons shredded beef on the other. Fold and close and fry until cheese melts and tortilla begins to crisp. Repeat with remaining tortillas, cheese, and beef.

3. Serve with a side of broth, chopped onion, cilantro, radish slices, and a squeeze of lime juice.