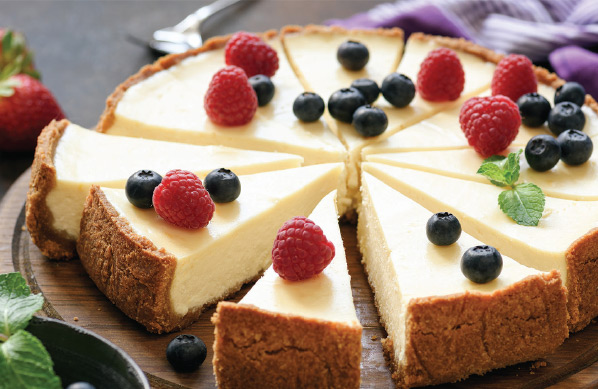 Dessert remains a popular post-meal occasion, with 57% of consumers eating dessert at least once a week and a third of consumers stating they eat dessert daily. When it comes to delineating what makes a dessert a dessert, conventional definitions continue to dominate. Some 71% of consumers say that traditional desserts such as cookies, pies and cakes are what define a dessert. However, desserts are increasingly defined as anytime occasions. The percentage of consumers who consider a dessert as any sweet food item consumed at any time (not just after a meal) increased to 37%, up from 33% in 2015, as did those who define dessert as sweet beverages consumed at any time (25%, up from 21% in 2015). This suggests that operators now have more opportunities than before to drive off-peak traffic with desserts. 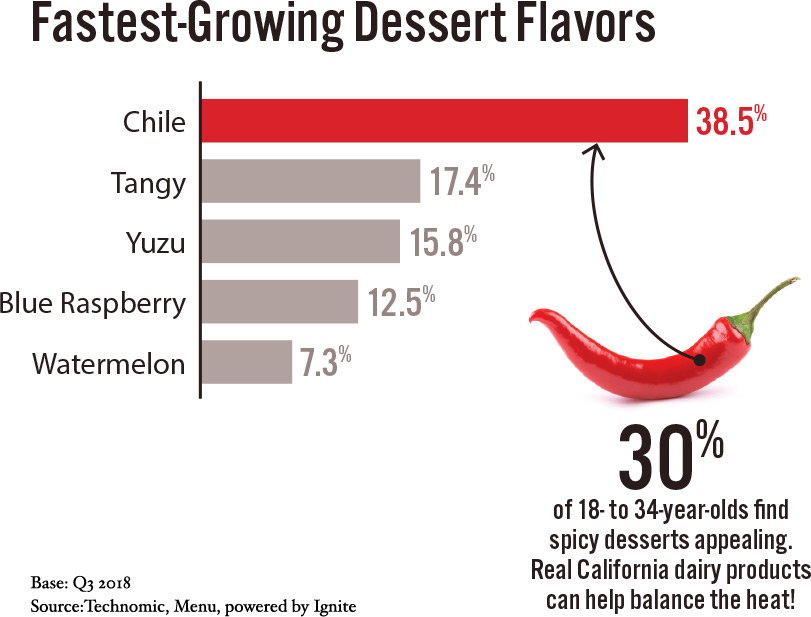 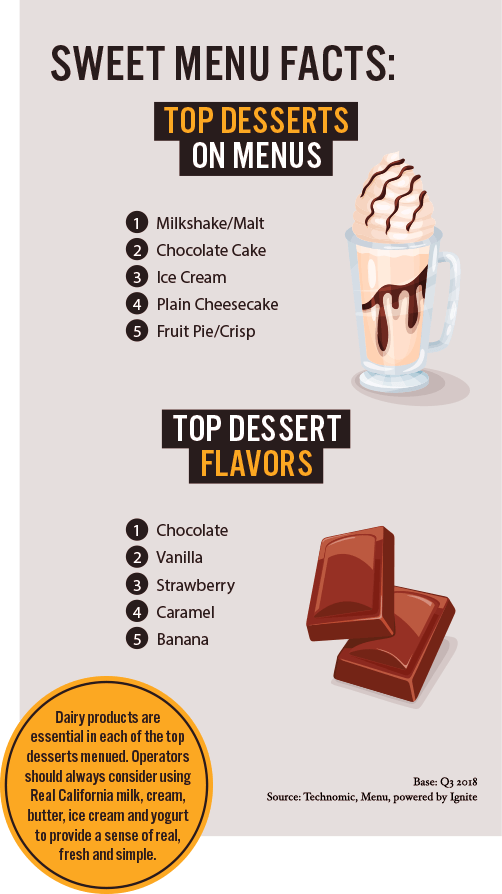 For the most part, consumer preferences for dessert types align with what’s already being offered on menus. The top four desserts that consumers say they’re most likely to purchase are among the leading four desserts listed on menus. But there are a number of demographic skews when it comes to dessert preferences. Let’s delve into a few. 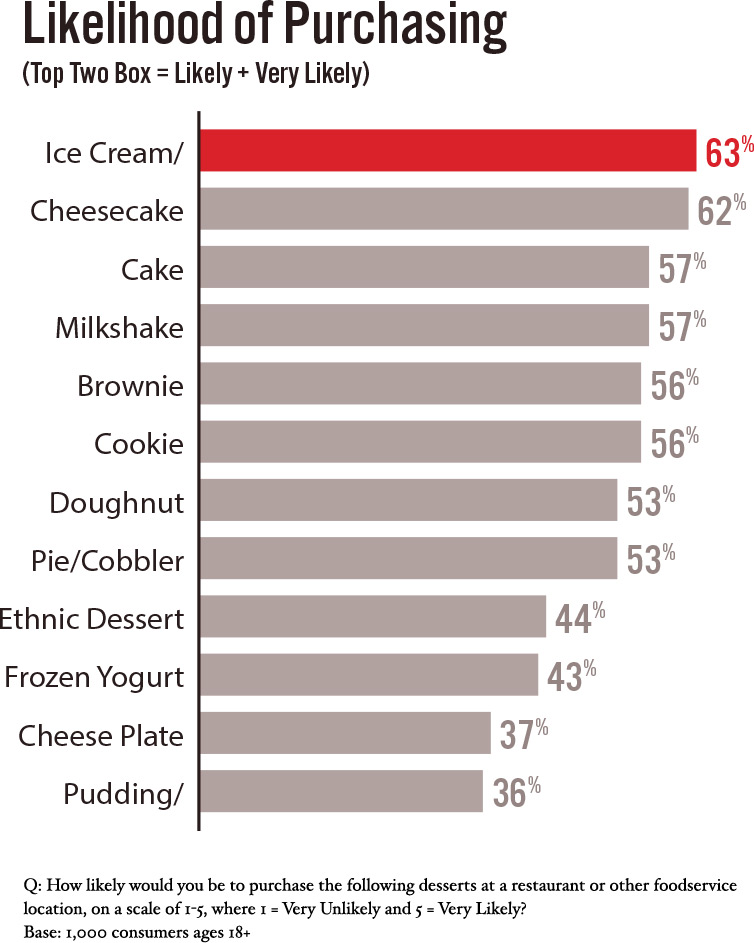 Millennials (those born between 1977 and 1992) are more likely than consumers of all other generations to order every dessert. The sole exception is with ice cream and gelato—Gen Zers slightly beat out Millennials, with 75% saying they’d likely purchase ice cream or gelato versus 74% of Millennials.

In most instances, consumers in the South are more likely than those from other regions to order most desserts, including brownies, cake, cheesecake, cheese plates, cookies, ice cream, milkshakes, pudding/custard and pies/cobblers. However, it’s not the case for all desserts: Northeasterners are the most likely to order ethnic desserts and Westerners are the most likely to purchase frozen yogurt.

Three in five consumers (60%) enjoy putting toppings on their desserts. This is largely driven by younger consumers, with 70% of Gen Zers and 71% of Millennials agreeing. Here are a few facts to consider regarding dessert toppings. 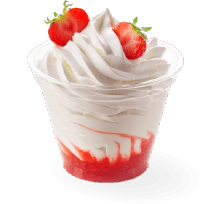 Whipped cream is a topping favorite for a range of desserts. Some 68% of consumers enjoy topping their desserts with whipped cream, skewing high for Gen Xers at 74%. It’s a top-two favorite topping for both ice cream and frozen yogurt. 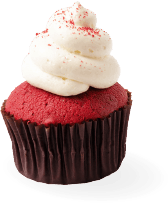 Cream cheese frosting is an innovative topping for cakes, the leading dessert after ice cream on which consumers say they enjoy putting toppings. Plus, this could further appeal to the 57% of Millennials who say they want to see more cheese-based desserts. 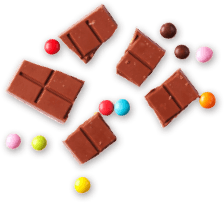 Novel toppings beyond the ordinary could appeal to those looking for more nontraditional desserts. How about drizzling butterscotch syrup or dropping candy pieces atop a traditional dessert for a twist on a classic?

Desserts may be an indulgent occasion, but consumers still want to feel good about what they put into their bodies. Descriptors such as scratch-made or Real California milk in ice cream are most likely to suggest to consumers that a dessert is better for them, and 29% of consumers (including 37% of 18- to 34-year-olds) say they are increasingly eating healthier desserts. Top clean-eating attributes that increase purchase intent and price thresholds include real, made-from-scratch, natural and no artificial flavors/colors.

WHY? 60% of consumers would like to see more better-for-you desserts

ON THE MENU: Fuzio Universal Bistro in Modesto, Calif., menus Cheesecake by Chef Fuzio, selections that are made from scratch and change regularly. Pictured is Mango Cheesecake, a seasonal option topped with real mint. (a)

BLAST FROM THE PAST

ON THE MENU: Millbrae, Calif.-based CREAM is known for customizable ice cream sandwiches served on freshly baked cookies with a choice of topping, including Gummy Bears and mini marshmallows. (b)

Desserts are the perfect mealpart to go big or go home, and that’s what many operators are doing. Trending now are overexaggerated portions, brightly colored sweets, eye-catching and novel presentations of desserts and mashups. These often Instagrammable appearances help generate buzz and drive traffic, differentiate concepts from competitors and meet younger consumers’ expectations for new and exciting dining experiences.

ON THE MENU: Millbrae, Calif.-based CREAM is known for customizable ice cream sandwiches served on freshly baked cookies with a choice of topping, including Gummy Bears and mini marshmallows. (c) 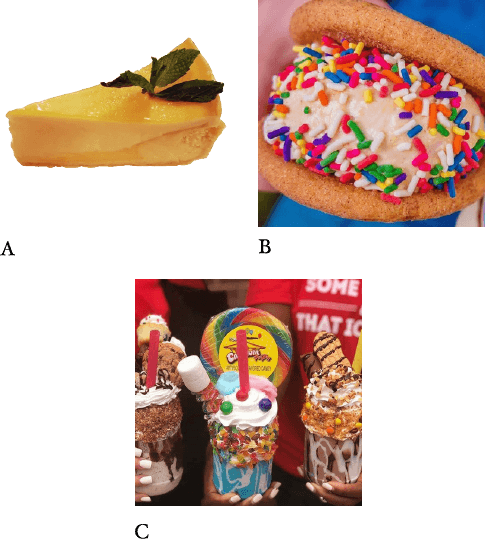 On average, operators offer 4.9 desserts on their menus. But still, 64% of consumers would like to see more dessert options at restaurants. That skews heavily for women (68% versus 59% men). However, generationally, Gen Zers have the strongest feeling about wanting more dessert options at 79% compared to 70% of Millennials and Gen Xers and 51% of Baby Boomers. But operators needn’t get overwhelmed with rolling out a plethora of new dessert options to appeal to these consumers. Here are a few ways to appease today’s diners: