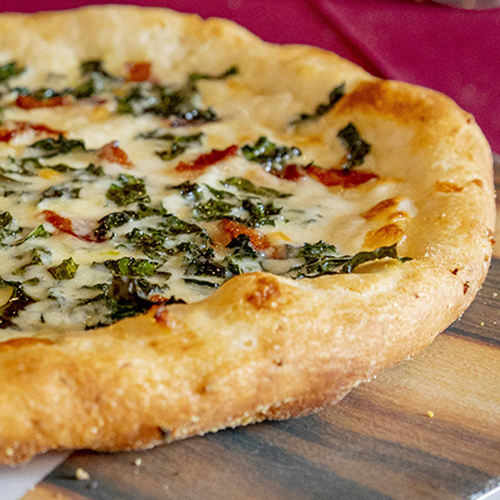 To prepare Pizza Dough, place water and yeast in bowl of stand mixer with dough hook. Let sit, stirring occasionally until yeast is dissolved. Stir in oil, sugar and salt, then flour. Mix until smooth elastic dough forms. Cover bowl with towel and allow to proof until double in size.

To prepare Toppings, brown diced bacon in medium frying pan. Reserve fat and set browned bacon aside. Add onions to bacon fat in pan. Cook over medium heat until well caramelized, then set aside. Toss kale with olive oil then season with salt and pepper.

To prepare Pizza, preheat oven to 475°F. Turn proofed dough onto lightly floured board. Stretch and shape dough as desired and place on parchment lined sheet pan. Season with salt and pepper; bake for 10 to 12 minutes until the bottom is lightly browned. Remove from oven; spread with Sauce leaving a ¼ inch rim around edge. Sprinkle shredded garlic cheddar cheese evenly over sauce. Top evenly with caramelized onions, then kale, then crisp bacon bits. Bake for an additional 9 to 10 minutes until cheese is melted and kale is crispy. Slice before serving.