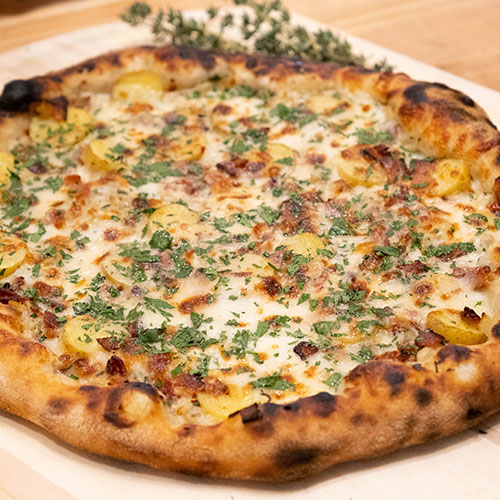 8 to 12 hours before you make pizza, stir together starter, water, and oil. Add flour and salt and mix until the flour is completely hydrated. Remove dough and clean the bowl. Lightly oil bowl and return dough, rolling to coat dough with oil. Cover with plastic and proof at room temperature until doubled in size. Preheat oven to 550°F or as high as it will go. Place pizza stone on middle rack and heat for 30-45 minutes. Remove dough from bowl and divide in half. Shape each half into a ball, cover and let sit 20 minutes. When both halves have risen again slightly, stretch one piece into a circle, making sure to leave a puffy lip. Transfer disc to a cornmeal-dusted peel and work out further until desired thickness is achieved.

To prepare Clam Sauce, heat oil and bacon in a large pan over medium-low heat. Render fat from bacon; remove crisped bacon and reserve for pizza topping. Add onions and garlic to the drippings in pan; cook on low, stirring often, until onions are softened. Add wine, salt and pepper, and bring to a simmer. Add clams and cook until they open. Remove clams. Allow to cool, pick out meat, and chop. Continue to simmer the wine mixture until it is reduced into a thick glaze, about 10 minutes. Stir in cream and butter, simmering and stirring until it is reduced by half, about 10 minutes more. Stir in the chopped clam meat and crème fraîche; remove from heat.