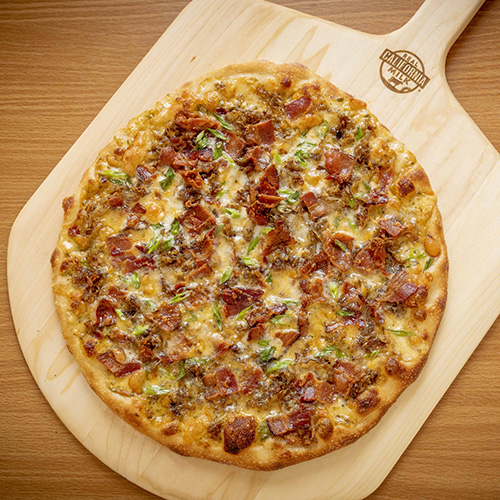 To prepare Béchamel Sauce, melt butter in medium saucepan. Thinly slice white and light green parts of cleaned leek. Add leek and minced garlic to pan, season with salt and pepper. Sauté until leeks are tender, about 10 minutes. Add flour and cook for a minute more. Whisk in chicken stock and Guinness and bring to a boil. Whisk until thickened. Add cayenne and nutmeg. Remove from heat; whisk in shredded cheddar cheese and parsley, whisking until cheese is melted.

To prepare Bacon and Hashbrowns, cook bacon in frying pan until crisp. Remove bacon from pan and drain on paper towels. Crumble into large pieces and set aside. Pour all but ¼ cup bacon fat from frying pan and reserve pan for frying potatoes.

Clean, dry and shred potato, leaving skin on. Place in a clean kitchen towel and squeeze out as much liquid as possible.

Heat pan with bacon fat. Add shredded potatoes to pan, spreading evenly. Season lightly with salt and pepper. Allow to cook and begin to crisp before flipping. Flip to cook other side until lightly browned and crisp as well. Set aside.

To assemble Pizza, preheat pizza stone in oven at 500°F. Stretch 1 ball pizza dough into a 14- inch round on well-floured work surface. Transfer dough to a wooden peel that has been prepared with ground semolina. Using an offset spatula, spread ½ of Béchamel Cheese Sauce on dough leaving ½ inch border at edge. Reserve remaining Bechamel for another pizza. Distribute 1 ½ cups shredded mozzarella cheese over sauce, followed by ½ of hash browns and bacon, 2 tablespoons Asiago cheese and ½ of scallions. Transfer pizza to preheated stone. Bake about 8 minutes, rotating pizza halfway through to ensure even cooking. Bake until the crust is golden brown, cheese is fully melted and toppings are slightly browned.